Wheat stocks of main exporters adjust—what destination is the Argentine wheat going to? 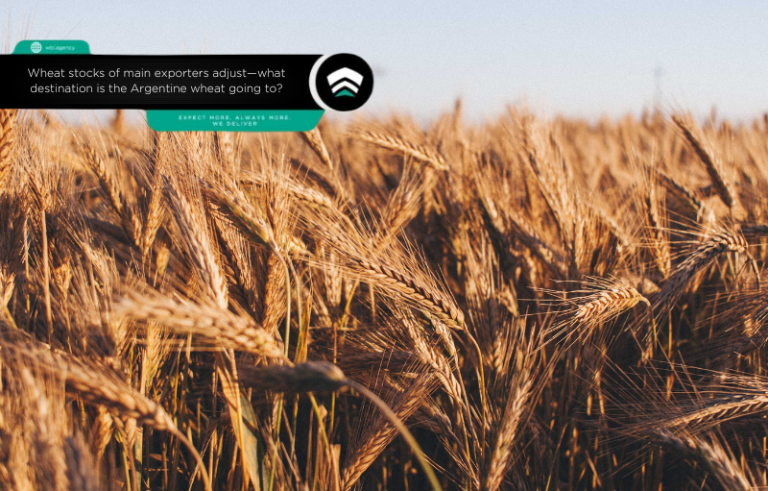 Wheat stocks of main exporters adjust—what destination is the Argentine wheat going to?

Wheat stocks of the world’s largest exporters have been decreasing, and cereal prices continue to show a bullish response. For this reason, and with greater export potential, Argentina has distributed its shipments among a greater number of destinations.

Stock levels of the main wheat exporters in recent years have shown a downward trend, having fallen to almost the same volume registered in the 2012/13 campaign. For the coming season, while larger end-crops for Russia and Canada increased by 0.5 Mt each, to 11.6 Mil MT and 3.9 Mil MT respectively; global number is partially offset by a reduction of the Ukrainian production (-0.8 Mil MT), which would be lower than forecasted.

Meanwhile, the European Union’s stock level has greatly decreased compared to the previous cycle. This 23% decrease for the new campaign is due, in part, to the armed conflict in the Black Sea region, which has generated a larger demand for European grains from several countries in Africa, Asia and the Middle East.

Ukraine’s end-stock levels in 2022/23 could increase due to current lockouts and logistic hindrance. Wheat prices have reacted bullishly since the beginning of the conflict, hitting record highs in February this year. Regarding this week, the prices have been influenced by the new bombings, causing wheat futures to increase by more than 15 USD/MT.

Russia and EU have significantly increased their exports, which translates to lower levels of stocks for the new campaign. Canada, as an important commercial player, will increase its participation in international trade. This is partly due to the increase in production expected for the new campaign, product of good weather conditions in the Canadian fields. Meanwhile, in the United States and Australia, production is expected to increase marginally for the next cycle.

Where does Argentine wheat go? Market opportunities for the South American grain producer.

In the new reconfiguration of the Argentine wheat market, if we compare the past and current campaigns, we can see that Brazil has decreased its share of ARG wheat purchases, which suggests a lower dependence on the neighboring country, and a change in the trend that was shown with our Argentina’s trading partner last year. In this current situation, shipments to various countries in Africa and Asia would increase through small purchases made in multiple shipments.

From one campaign to another, the share of shipments to Brazil decreased by 20%, while Indonesia’s share increased by almost 6%. In general terms, shipments to Latin American countries were reduced, compensated by those headed to the Middle East.

On the African front, a few destinations for Argentine cereal stand out. Morocco, Kenya and Algeria shown to be the main buyers, though Guinea, Tanzania and Uganda have begun to buy Argentine wheat as well.

As long as the price of Argentine grain remains competitive, the increase in exportable volumes may stimulate the reinsertion of Argentine wheat in new markets.