Uncertainty regarding production, and falling sunflower prices for the 2022/23 season 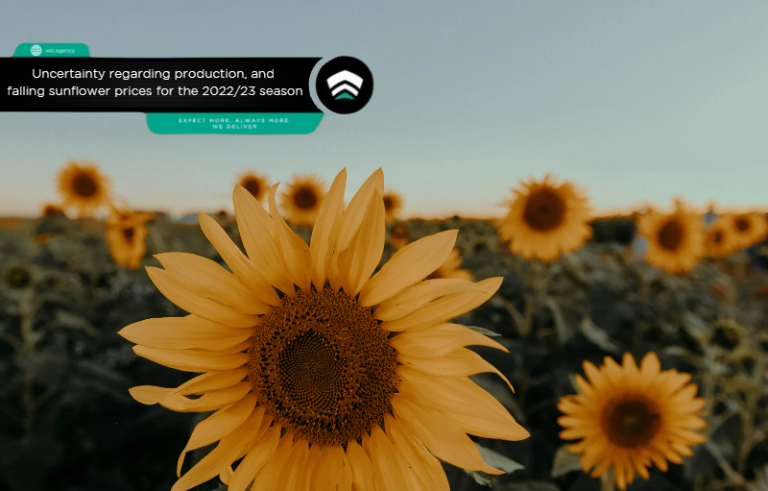 Uncertainty regarding production, and falling sunflower prices for the 2022/23 season

From excellent prospects before sowing, sunflower production it is now in a state of strong uncertainty due to the lack of water, which reduces its yield potential.

Sunflower production in Argentina has two main hotspots, one being in Chaco and northern Santa Fe provinces, and the other in the south of the province of Buenos Aires. Water reserves in these regions where sunflower is planted have decreased significantly when compared to 2021 and affects the estimated production of the next harvest. In the last week couple of weeks in particular, the situation has worsened in the southern part of Buenos Aires—the productive core that up to now had been relatively unscathed.

Although the planting area for sunflower is projected to increase, the lack of soil moisture delays sowing, particularly in the southern core. Nonetheless, it should be noted that the 2.2 Mil MT that have been projected for the 2022/23 campaign represent the largest area dedicated to sunflower since the 2007/08 season.

In Chaco province, sowing progresses in fair-to-good conditions. There was some progress done during the beginning of last week, but still lagging in headway. As for the province of Santa Fe, sown crops evolve correctly, but if no rainfall is seen in the coming days, the remaining development stages will be compromised by low soil moisture.

With uncertainties in projected production and falling prices, trades have slowed down in the local market.

Since the last highs reached at the beginning of June, domestic sunflower prices have fallen at a steady pace. At that time, prices were at 690 USD/MT, while in the last weeks we could see levels at 365 UDS/MT, according to the prices of the Cámara Arbitral de Cereales (CAC – BCR). Therefore, we can see that from then to now, prices have fallen almost 47% in relative terms. In the same sense, current levels are below prices seen a year ago, since for October 18th 2021, sunflower quotes were seen 465.30 UST/MT, translating to a strong year-on-year drop of 21.5%.

This drop in the level of commitments can be interpreted as a logical reaction of both supply and demand. This is because the projections of October 13th predicted weather consistent with a “Niña” period, with a 75% probability for the months of December to February, which may lower the potential yields of the oilseed and lead to complications when it comes to meeting these commitments. At the same time, the aforementioned drop in prices, which has been close to 30% in recent months, discourages doing further business.