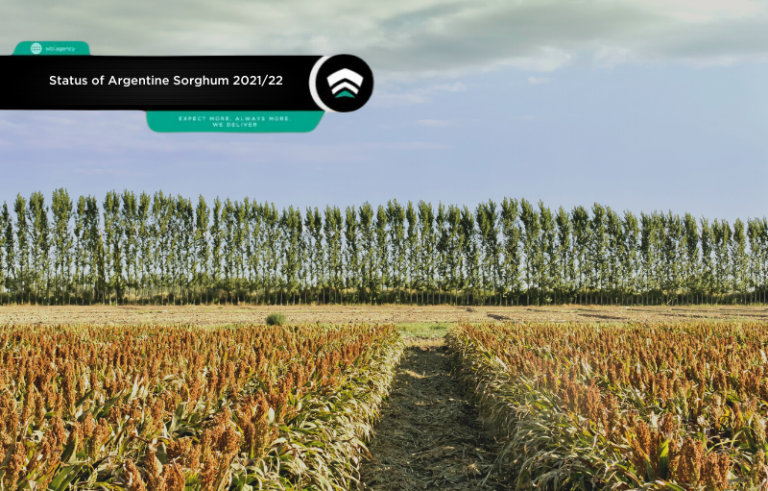 For the 2021/22 sorghum campaign, a production decrease close to 500,000 tons is expected, when compared to the previous cycle. Furthermore, same as in the last campaign, exports will represent the main destination of the commercial activity.

The 2020/21 sorghum campaign is in the past, and has left us with a great productive year, reaching 3.3 Mil MT of which 66.7% was exported, which is about 2.2 Mil MT. These levels were reached with the strong push from the international market, plus a considerable hike in the sowing area. Sorghum
appears as a crop whose planting is well-distributed among the provinces of the central region, where we can find 73% of the total sown area, between Córdoba, Santa Fe, Entre Ríos and Buenos Aires. The rest of the provinces that complete the total area come to less than 10%, led by the Province of Chaco, which represents 7% of the national territory devoted to sorghum.

The bar was raised for the 2021/22 cycle, since there was a decrease in the planted area of almost 50,000 hectares compared to the previous cycle.
Additionally, the strong drought suffered in part of the summertime caused a drop in production estimates due to lower yields and surface area. However, it’s worth highlighting the resilient nature of this crop, which gives it an advantage when faced with droughts, compared to other summer crops like corn and soybean. This resilience cushioned the drop in yields and, if we expect a harvest level (harvested/sown area) similar to the average of the last 5 campaigns, on average, the drop in yields would be close to 7.3% compared to the 2020/21 harvest, going from 4.43 MT/Ha to 4.11 MT/Ha.

Preliminary production estimates show a total of 2.8 Mil MT of grain produced in the current cycle. Of this amount, 53.6% of the total will be destined for export, while the remaining 46.4% will be destined for domestic consumption. These figures indicate an increase in local demand, which is generated mainly by greater use within livestock production, that is, animal feed. Compared to last season, exports decreased its share over total production, although at the moment there is a good amount of Export Permits (DJVE) taking into account the tons that are estimated to be shipped abroad.

Conclusions
Improvements in local and international prices have made the grain more competitive and have supported local production.

Local exports have been boosted with China’s entry into the Argentine market, even though it is a relatively recent phenomenon. With a constant domestic demand, exports stand as the main driver of Argentine sorghum.

The expansion of the planted area is offset by the drop in yields due to a complex climatic scenario, leaving us with a similar production between this campaign and the previous one. Lastly, improvements with the introduction of optimal hybrids, as well as the early detection of pests, diseases and weeds also provide strengthen the foundations of the productive framework of sorghum, giving rise to a wide spectrum of growth for the coming campaigns.