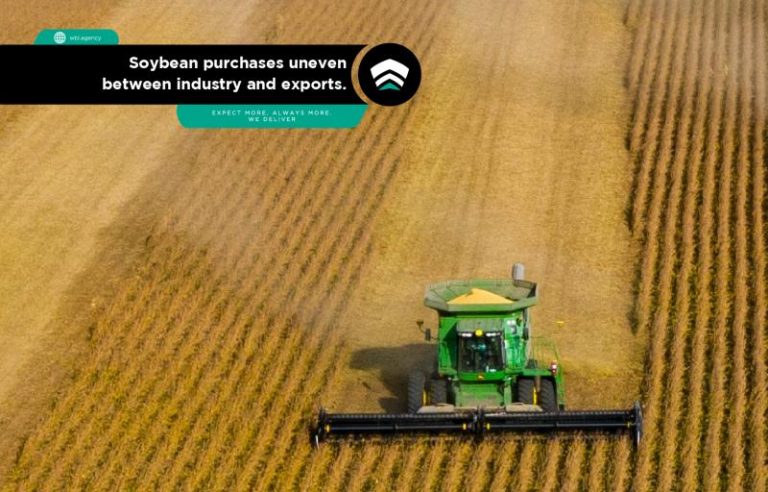 SB sales are at low (in tons) for the export sector. Corn, on the other hand, it is in line with the historical average. In this article we will go deeper into the controversial issue of soybean sales.

With almost three months passed since the beginning of the 2021/22 soybean commercial campaign, the commercialization of the oilseed remains at low levels, measured in absolute terms, with only 18.5 Mil MT originated to date by the industrial and exporting sectors. We would have to go back 19 years -to the 2003/04 campaign- to find a lower record measured in tons for this time of the year: back then, 17.8 Mil MT had been sold. When we consider sales volume as a proportion of the production of the campaign, it can be seen that the delay persists although in smaller magnitude since soybean sales amount to 44% of production, below the 50% of the previous year last year and the 51% of the last five cycles.  However, the 2016/17 campaign exhibited a 43% record, so the current sales volume as a proportion of production is not so atypical in historical terms.

When we look at the volume of purchases by the industrial sector and the export sector, we can have a somewhat clearer picture of what’s going on. The industrial sector has purchased 16.2 Mil MT of the oilseed. Although this volume is lower than that recorded in the last seasons (in the last 5 years the volume traded by mid-June was between 17.1 and 20 Mil MT), taken as a proportion of production, the volume purchased by the industry is above historical levels for mid-June, exceeding what has occurred in recent years. Purchases by the sector represent 39% of the production of the campaign, while only once in the last 10 years this proportion was exceeded: in 2017/18 they represented 52%.

The flip side are the purchases of the exporting sector. The latter has purchased just 2.3 Mil MT, representing only 5% of the season’s production, which is historically low. However, given that soybean exports for the current season are projected at 2.7 Mil MT (the lowest volume in more than 20 years, as a result of lower production), it is worthwhile to perform an additional exercise. If we consider export purchases as a proportion of projected exports for the season, these represent 85%, which is not far from the historical average (the average for the last 3 years is 89%).

In other words, although at first sight it seems that there is a delay in the commercialization of soybeans, it can be concluded from the above analysis that this is not true for the crush sector, while for the exporting sector it responds to market conditions. During most of the last months, crush margins have been much higher than the margin of the exporting sector. Although this relationship reversed in recent weeks, the change is very recent so it is not yet reflected in the purchasing levels of the export sector.

As for corn, sales are in line with historical levels. The volume of maize traded to date amounts to 27.9 Mil MT, below the 31 Mil MT of the same date of the previous cycle, though surpassing previous years. Moreover, taking sales as a proportion of production, these represent 57% of the grain obtained in the season, slightly below the 60% of last year but 7% above the average of the last five years. In other words, both in absolute and relative terms, corn sales are not lagging at all.

Regarding the logistics of grains already traded, the numbers of trucks entering the port terminals of Gran Rosario reflect the productive drop in the current campaign, both for corn and soybean. Taking the number of vehicles entered since the month before the beginning of the commercial cycle, the total number of units transporting corn arrived amounted to 314,000, 11% below the same date of the previous year. Moreover, it is the lowest volume in the last 4 years. It should be noted that, as mentioned in the previous week’s edition of the Weekly Update, the corn harvest continues at a good pace, above what happened a year ago, although somewhat below the average of the last five years.

On the soybean side, the number of trucks arrived at Rosario terminals amounted to 337,000, which is a drop of 4% compared to the previous year. However, this is the third lowest record in the last decade, only surpassing what happened in 2018 and 2012, both years in which a severe drought severely affected the crop and led to a drop in production.

On Thursday, the number of incoming trucks fell sharply as a result of the conflicts that are being unleashed in the various routes of the country, which have virtually paralyzed the transport of cargo in Argentina. The total number of units arriving at the region’s port terminals up to 7 a.m. was 409, minimum levels since the beginning of March. Just for perspective, the average daily arrival in the previous week using that methodology was 3,407 trucks, and the day with the lowest number of trucks arriving was Monday with 2,068. In addition, the total number of corn trucks was 187, the lowest since the beginning of February, and that of soybeans was 140, the lowest in more than 3 months.

On the international front, the week’s news came from what happened in the Chicago market with respect to prices. The soybean futures contract with the highest volume traded on Thursday’s trading session fell 22 USD/MT, and thus pierced the 600 USD/MT barrier for the first time in more than a month and closed at 585.4 USD/MT, a low since April 1st. Moreover, since the historical maximum reached on June 9th, the oilseed price dropped by no less than 64.5 USD/MT. On the corn side, the most traded contract fell 8.3 USD/MT and closed at 293 USD/MT, the lowest price since the beginning of June. In addition, in the last week, the price of the most traded contract of maize in the U.S. reference market fell 5%.

These declines are explained both by factors specific to the grain markets and by global external factors. Regarding the former, the focus is on what happens with the weather in the United States, and forecasts for the weekend indicate rains in several of the main North American production regions, which are expected to fall at the ideal moment, just before the corn pollination stage. As for the latter, it is worth mentioning the recent increase in interest rates by the US Federal Reserve, which may have caused investment funds to decide to withdraw their positions in commodities. In this context, in addition to the sharp drop in oil prices in the last few days, soybean and corn prices were also under pressure due to their use in the production of biodiesel and bioethanol, respectively.

In the Rosario market, meanwhile, prices traded in the same direction. Thursday’s price of the Rosario Grain Arbitration Chamber (Cámara Arbitral de Cereales de Rosario) equivalent in dollars was 380 USD/MT for soybean and 231 USD/MT for corn. Thus, the oilseed fell 6% between last Thursday and the previous Thursday, while the grain fell 9%.