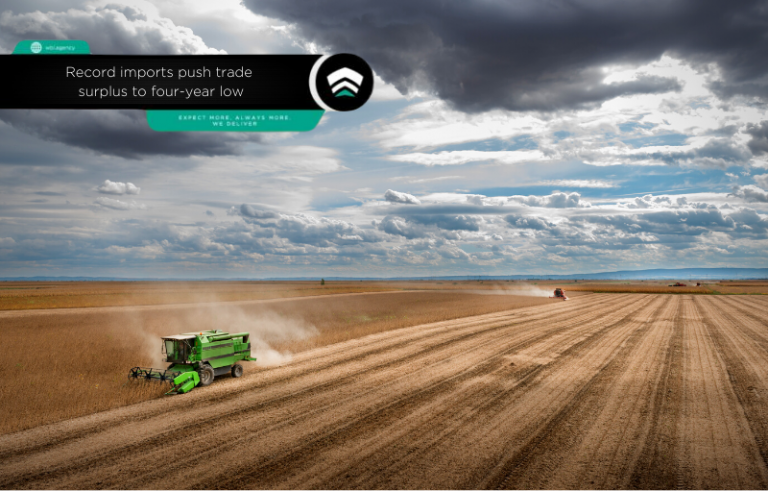 Agriculture represents a mere 7.7% of Argentine imports. So far in 2022, those imports have grown by more than 45%, thus substantially limiting the trade surplus. Energy imports grew the most by far.

In the first seven months of this year, imports totaled almost 50 billion dollars, jumping almost 45% compared to the same period of the previous year. This import milestone has resulted in a drop in the trade surplus, which is at its lowest since 2018—the last year to date that showed a trade deficit at a consolidated level.

Total exports have grown more than 22% year-on-year. As highlighted before, this rise is explained fundamentally by agriculture, which accounts for more than 65% of exports. However, as the level of imports grew much more in terms, both relative and absolute, the trade balance’s surplus has begun to shrink.

The agro-industrial production chain is composed of both national production and imports. The main agricultural imports include fertilizers, capital goods and soybeans (mainly from Paraguay) to be processed by local crush plants and subsequently exported with added value. It’s worth noting that capital goods are essential in order to sustained international agricultural competitiveness, while fertilizers are basic inputs to strengthen grain production in Argentina.

Also, temporary imports of soybeans are carried out with the fundamental purpose of strengthening the crush industry in Argentina. It is known that the domestic consumption of soybeans is meager, so there should be no doubt that all bean imports are destined for industrial processing and then export to a wide range of destinations supplied by Argentina. Furthermore, the sum of these three complexes related to agriculture represents just 7.7% of total imports in the first seven months of 2022. This number is less than the 9.4% for the same period in 2021.

A large part of the increase in Argentine imports in 2022 is explained by these intermediate goods and energy.

Meanwhile, energy imports had already skyrocketed, jumping 121% in 2021 compared to 2020, and this way consolidating a year-on-year rise of 200% in the first 7 months of 2022. The strong rise in imports of Fuels and Energy increases from 13% to 18% respectively.