Maize harvest and wheat planting progress each at their own pace 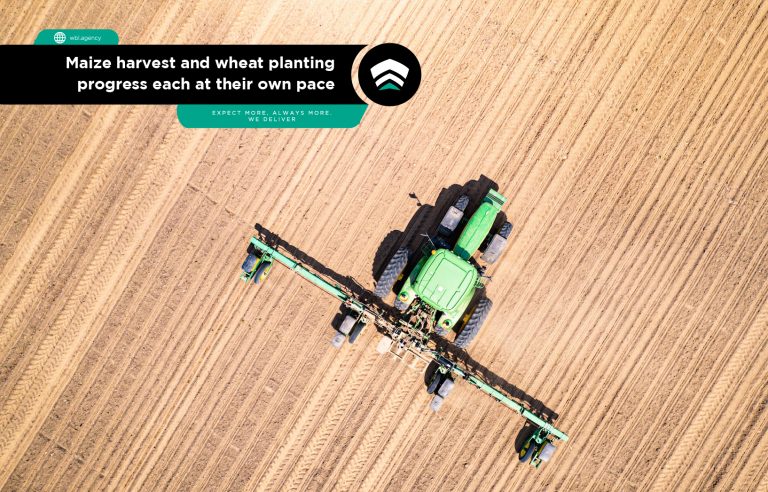 Maize harvest and wheat planting progress each at their own pace

While the maize harvest is delayed due to high moisture, wheat planting scales up to 31% of the target area. In the United States, wheat ends its 2021/22 campaign with the worst volume of exports on record.

Below its historical average, the maize harvest continues

With the arrival of June, the maize harvest was completed in half of the sown area, exceeding 56% of the lots as of June 9th. With a sustained growth of the area planted with corn, 4.55 million hectares of maize are still pending to be harvested, an amount only surpassed by last season. It should be noted that the current campaign is characterized by breaking the 10.3 Mil Ha barrier, above the 9.7 Mil Ha of the previous year and comfortably above historical averages.

However, the late maize harvests in the provinces of Buenos Aires, Cordoba, and Santa Fe are advancing slowly, waiting for the corn to reach proper moisture levels. Considering this, the impact of the shortage of diesel is limited by this harvest delay. Once the adequate moisture levels have been reached, if the diesel shortage scenario persists, maize could continue harvest below its historical average.

Meanwhile, Corrientes, Misiones and Entre Ríos provinces have practically finished their maize harvests. The provinces of Santa Fe, Buenos Aires, and Formosa follow with high levels, with 71%, 54%, and 44%, respectively. Córdoba reflects 41% of maize harvested, while La Pampa, San Luis, and Santiago del Estero provinces complete the list with 38%, 43%, and 31% of the area.

Within this context, the WASDE report presented by the USDA last week is also relevant. Referring to the world corn scenario, it shows an increase in harvest estimates, jumping 5.1 Mil MT compared to the previous report, reaching almost 1,186 Mil MT. However, this figure is still 2.5% lower than that of 2021, when it reached 1,216 Mil MT.

One of the most important factors for the rise in maize prices is related to the drop in the area planted worldwide, of almost 1.6%. Along with this, the global yield is estimated to be 1% lower for the 2022/23 campaign, which results in a consolidated production drop of almost 2.49% for the coming business year.

Contrary to the slow harvest of maize, sowing of wheat has been gaining pace and has already covered almost 31% of the target area. It should be noted that for the coming campaign 2022/23 the wheat area is expected to exceed 6.7 Mil Ha, slightly below the current commercial year.

The first week of June saw strong increases in international wheat prices in the Chicago market, reaching 450 USD/MT. Operators closely follow the weather situation in the United States, which has been impacting prices. There was also a rally in maize, where the contract due next month increased by 2.13% or USD 6.10 and registered a price of 292.81 USD/MT.

At the local level, the price of wheat on the Matba-Rofex rose USD 40 in the previous weeks, establishing a great milestone in prices, with each ton trading at USD 367. As for maize, the increases were slight and reached 310 USD/MT in June; given that, in May they registered values of USD 320 per ton, and in March they touched 350 USD/MT.

In the United States, wheat wraps up the commercial year with the worst volume of exports on record

The US 2022/23 wheat campaign began with the commencement of June. The end of 2021/22 found the United States with its worst export volume on record, with 18.6 Mil MT. This volume of exports represented a drop of almost 25% compared to last business year.

The complex productive dynamics of US wheat were decisive for such a pronounced decline. In addition to successive deteriorations in winter wheat, spring wheat in the United States showed its worst crop condition in history last year, which necessarily impacted production and export volumes. The US outlook for 2022/23 finds winter wheat, which accounts for about three-quarters of the wheat crop, in one of the worst growing conditions on record, also complicating the production’s current outlook.