Flow of trucks in July falls as late corn harvest slows down. 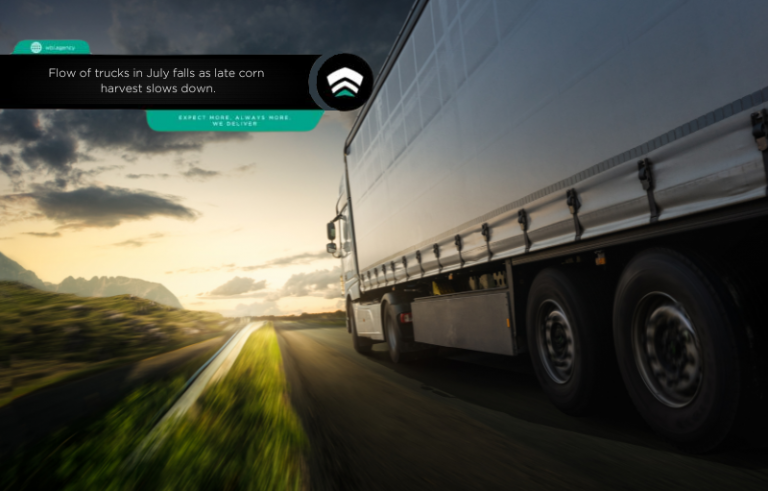 Flow of trucks in July falls as late corn harvest slows down.

The flow corn trucks to port terminals in the last month was lower than 2021 as harvest slows down, as well as showing lower yields. Additionally, the production of biodiesel grew strongly in the first semester.

Late Corn is coming in at a slower pace than it did a year ago. According to information from the MAGyP, up to the end of June, the threshing of maize had been exceeding that of last season. with 73% vs. 68% of last year. However, since then harvest has only progressed 17% in 6 weeks, reaching 90% last Thursday, while at the same time last year, the threshing progress had crept up to 95%.

To have a better grasp, this suggests that between June 30th and August 4th, an estimated 2 Mil Ha were harvested, contrasting with the 2.6 Mil Ha of the same period. To the reduced harvested area, we can add that the lower yields obtained for this cycle’s Late Corn, due to the lack of rain that affected the development of the crop at critical moments.

These factors impact in the number of trucks seen entering Rosario port, which from the beginning of July until today, are quoted at 119,322. This marks a drop of 21% compared to the same period in 2021. In contrast, the arrival of trucks to the ports in the south of the province of Buenos Aires show an increase of 21% compared to 2021, where 59,184 vehicles carrying corn arrived since July 1st. However, if we add the flow of trucks from the two main port regions of the country, we reach 181,780 trucks from the beginning of July to date, which is 10% less compared to last year.

As for soybeans and subproducts, there are two interesting points to consider. In the first place, soybean oil exports in the first six months reached 2.5 Mil MT, which is 28% less than the exports of the first semester of last year, which was registered at 3.4 Mil MT. In other words, we’ve seen the lowest volume in the last five years, falling back to the 2017/18 harvest which had been affected by a historical drought.

Nonetheless, when we look at the crush in the first half of the year, we see that the it was only 10% lower than in the same period last year, so that oil exports showed a much greater proportional drop. In fact, if we consider meal/pellet exports between January and June, it shows a 9% year-on-year fall.

Taking the info up to May of each year (latest available data published by the Ministry of Energy), biodiesel production totals 910,000 MT so far this year—54% more than what was obtained in the first five months of 2021. In addition, it’s reasonable to think that this trend will continue in the coming months considering that in mid-June the biodiesel cut was increased through a Presidential Decree, in order to better deal with the diesel crisis that the country is facing.

An additional fact to mention is that sales of biodiesel reached 53,213 MT in May, the highest volume in 23 months (since July 2020), and it is likely that in June they will be exceeded again, due to the aforementioned increase in the cut.

The other interesting point to highlight is what happened with prices, in particular the relationship between spot price and deferred deliveries. Taking the price of the Matba-Rofex soybean contracts for delivery in Rosario in August and in November on August 3rd of each year, we can see that the delivery in November was higher than an August delivery. This makes sense as the price spread between the two positions usually has two implicit costs associated with it. In the first place, a real cost of “holding the merchandise over time”. In other words, storing soybeans to deliver them 3 months later has a real physical cost associated with the cost of storage. Secondly, an implicit cost of opportunity appears by not pursuing a spot sale and placing those funds to generate interests.

The annualized rate of this price difference between the August and the November positions was positive for all previous years, even reaching 18% per year in 2018. Nonetheless, the difference between these two prices (spot and 3-month deferred) today is zero, making the rate also zero. This indicates that the market is “penalizing” grain hoarding, in other words, rewarding prompt deliveries. This makes sense, given the industry’s need to obtain raw materials to maintain the production level, gain efficiency by minimizing idle capacity, and reduce fixed costs.