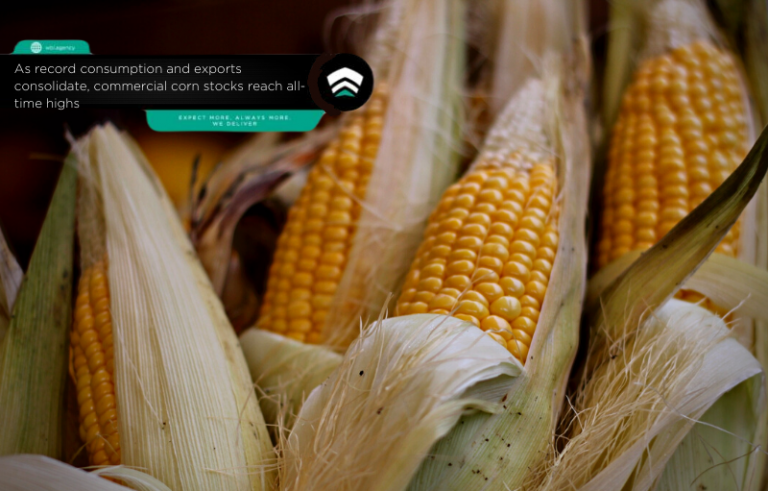 At the beginning of September, corn storage in silos, industrial warehouses and ports totaled more than 19 Mil MT. This volume, close to being poured into the domestic and export markets, marks a historical best for any month on record, dating back to February 2015. However, considering to the fact that the last grain seasons have been among the highest in history, we’re most likely facing the highest storage volume record in Argentina’s history.

Between August and September, corn storage grew by almost 2 Mil MT, contrary to what had happened in the last four years, where September kicked-off with stock drops on a month-on-month basis. In line with the high levels of meat and corn production and exports, clearly the increase of corn use and export in Argentina continues to gather importance.

WASDE down for US corn, up for prices

September’s edition of the World Agricultural Supply and Demand Report (WASDE) released by USDA showed declines in both corn supply and demand. However, production cuts outweighed drops in demand, leaving us with an estimated end-stock of 31 Mil MT, down 12% from August’s estimate.

This was also supported by Monday afternoon’s USDA crop monitoring report, which—after the WASDE—showed a further one-percent drop in corn condition. This brings it down to 53% of its lots in Good-to-Excellent condition; one point below expectations and 5 points below last year’s condition, reinforcing downward forecasts for corn production and exports for the United States.

In contrast, the USDA adjusted its global corn production estimates upward, with higher production in China, Ukraine and Canada. However, the price impact of this rebound in global production is limited by the fact that China and Canada are major producers, but not exporters of corn. On top of that, Ukraine sees its export prospects limited, pending on the continuity of the Black Sea grain corridor, agreed between Russia, Ukraine, Turkey and the UN. The future of the agreement, which expires on November 19th of this year, will be determined in the coming weeks.

On an international level of maize trades, the Chicago market was mostly on the rise, with the highest volume of corn futures traded with increases of 3% on Monday, due to the aforementioned WASDE report; this resulted in level-highs not seen since June. The rest of the week the US market traded slightly down due to technical sales and better prospects for the corn harvest in Europe, which tended to limit the volume obtained.

On the local level, during the week in the Rosario market, the commercial operations remained focused mainly on soybeans, while cereal activity was very limited, with uneven prices for corn. During the first days of the week we could see higher activity, with offers for both this and next season’s maize. Bids for spot corn ranged around 235 USD/MT. However, from Wednesday onwards the number of buyers dropped, as well as delivery options, and there were no bids for new corn.