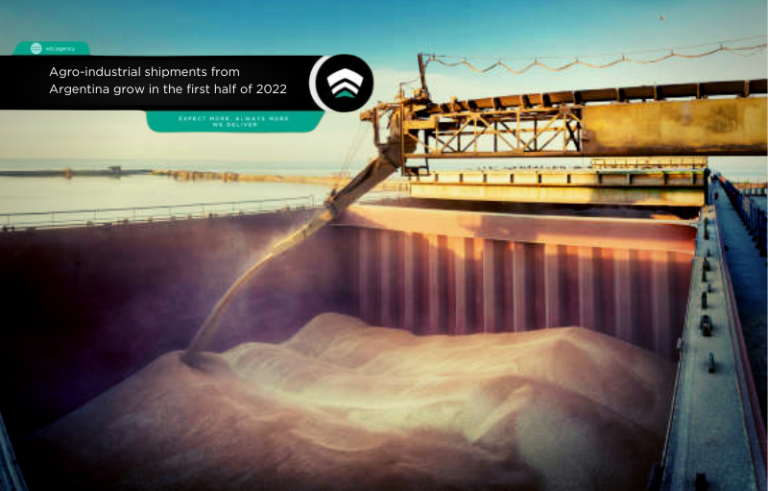 Argentina shipped a total of 51.2 MT of grains, by-products and oils during the first half of the year, 6% more than in the same period of 2021. This increase is explained, fundamentally, by a larger dispatch of grains: 32.7 Mil MT were shipped between January and June, 19% more than the volume reached in the first six months of the previous year. Meanwhile, oil shipments totaled 3 Mil between January and June, denoting a considerable fall in relation to first half of 2021, while shipments of by-products reached 15.5 Mil MT, also exhibiting a cut vs. 2021 but to a lesser extent.

The greater wheat production of the last campaign has left a record exportable balance for the cereal, which is reflected in the total shipments during the first semester. Wheat shipments reached 11.2 Mil MT between January and June, almost 80% more than in the same period of 2021. In addition, given that in 2021/22 the production of winter cereal in the central and northern region of the country was good (unlike the previous cycle 2020/21) and that the level of the Paraná River was recovering from February onwards, wheat shipments from the Up-River ports doubled between one year and another: in the first half of 2022 they reached 6.6 Mil MT while in 2021 they had totaled 3.2 Mil MT.

Barley also exhibited a notable performance, reaching a total dispatch of 2.9 Mil MT between January and June, exceeding by 46% the figure reached the previous year (2 Mil MT). On the other hand, corn shipments totaled no less than 17.2 Mil MT (vs. 16.7 Mil MT in 2021) and represented 52.5% of shipped grains. This is particularly noteworthy given that corn production for the current 2021/22 cycle is estimated to be lower than that of the previous campaign, which would leave a lower exportable balance.

Finally, looking within each of the categories, it is observed that the majority of grain shipments so far in 2022 had Brazil as their destination (3.2 Mil MT, equivalent to 10% of all grains) dispatched, which displaced China as the main destination. This is explained by a higher tonnage of wheat shipped, mainly, but also of barley to Brazil, and by a lower volume of soybeans shipped to China.

Vietnam has been the main destination of the by-products shipped from Argentine ports in the first semester (1.6 Mil MT, that is, 10% of the total) followed by Indonesia (1.4 Mil MT, 9% of the total). Both maintain the 1st and 2nd positions in the ranking that they had held during the first half of last year, and it is explained almost entirely by ship shipments of soybean pellets/meal.

In terms of oils, India remains the main Argentine customer, and so far, this year 1.7 Mil MT have been shipped, 48% of the total vegetable oils shipped from the country, followed by Bangladesh (0.25 Mil MT, 8% of the total). Furthermore, when we break down product type, India is the main destination for shipments of both soybean oil and sunflower oil, the two main vegoils shipped from Argentine terminals.