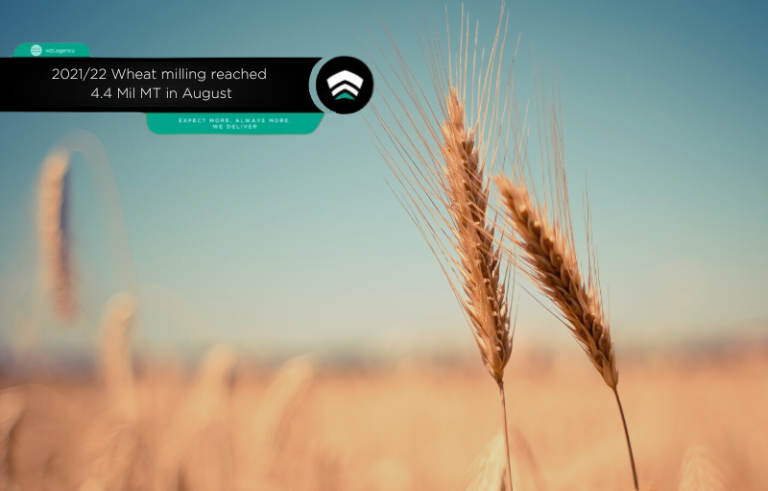 Uncertainty in the outcome of the Black Sea conflict, along with the volatility in world trade, continue to drive up prices. Locally, Argentine milling continues to increase 0.5 Mil MT per month.

The 2021/22 milling season, which kicked-off almost 15% above last year, begins to reduce its relative progress compared to previous years, and stands at 4.4 Mil MT for the accumulated period between December and August; that is to say, at average levels of the last years. It’s worth highlighting that the current campaign reached 23 Mil MT; that’s 6 Mil MT more than in 2020/21, which will allow placing 14.5 Mil MT abroad for the whole commercial campaign.

If we look at wheat-milling by provinces, there are no major surprises with the leading role centered in Buenos Aires, Córdoba and Santa Fe, representing 51%, 23% and 13% of the national total. Meanwhile, these three jurisdictions represent 87% of the complete Argentine milling industry, according to data from the Secretariat of Agriculture, Livestock and Fisheries (SAGyP).

2022/2023 would be the third season in which, globally, wheat production is below demand levels, causing stocks to remain tight. The fact that Russia, the main exporter of the cereal on a global scale, is at the geopolitical epicenter after its invasion of Ukraine adds an extra ingredient to the mix. A point to highlight is that the United States Department of Agriculture (USDA) projects that Russia will have a record crop of 91 Mil MT, which is 20% higher than the previous season, with the possibility of placing 42 Mil MT in the international market. Nonetheless, Russia has economic sanctions due to its invasion of Ukraine, which foreshadowed difficulties in the fluidity of its exports, particularly from the logistic point of view. An agreement had been reached, and a grain corridor in the Black Sea had been enabled, which would allow grain to be shipped without difficulty. Dispatches began slowly, but there are specialists who foresee that the logistics corridor will be renewed and exports will be expedited.

It’s hard to imagine that a wheat powerhouse such as Russia could easily be dismissed, especially considering that there are nearby regions with growing and very inelastic demands in recent years. The USDA expects the Middle East and North Africa to reach a record level of 2022/23 wheat imports, hitting 35.7 Mil MT and 30.2 Mil MT respectively.

The most significant news of the week came from the political arena, with the announcement that Russia would be sending more troops to the combat zones in Ukraine, which clearly caused a jump in wheat futures quotes in the Chicago market on Monday, confirming that an end to the conflict is still a ways away.

Concerns remain about exports from Ukraine, another factor influencing wheat prices earlier in the week, as there are fears about the continuity of the grain corridor that was established through an agreement coordinated by the United Nations and Turkey. It is halfway through its agreed duration and is expected to end around November 19th, if it is not renewed.

Lastly, for the time being, CBOT’s price quotations will continue to depend on the Spring Wheat harvest, as well as the current intrinsic problems that arise from shipping out of Black Sea.